The role of innate immunity in the protection conferred by a bacterial infection against cancer: study of an invertebrate model - Scientific Reports

Scientific Reports - The role of innate immunity in the protection conferred by a bacterial infection against cancer: study of an invertebrate model

When I started my PhD, I faced the challenge to work on tumor immunology in a laboratory that was dedicated to the ecology and the evolution of infectious diseases. The idea, behind this apparently strange association, was to benefit from the knowledge and the techniques acquired by decades of investigation on the interactions between pathogens and their host to provide news perspectives in cancer research. The role of infectious agents in promoting carcinogenesis is well described and it is now accepted that at least 20% of cancers have an infectious origin [1]. However, the protective effects of infections against cancer has been less investigated even though epidemiological studies show that individuals with an history of febrile acute infections are less at risk of developing cancer [2].

Therefore, in the article recently published in Scientific Reports, we explore the idea that infections could act as competitors of cancer cells in a manner similar to what has been observed between Haemophilus influenzae and Streptococcus pneumoniae in mice where the innate immune responses elicited specifically by the first led to clearance and competitive exclusion of the second [3]. We investigated this hypothesis using a Drosophila model which lack of adaptive immunity and where the innate immune mechanisms have therefore been selected to eliminate cancer cells [4].

Using naturally-occurring infections, we were able to show that bacterial infection induces tumor regression. We linked this tumor size reduction with the activation of specific innate immune responses and the production of antimicrobial products (AMPs). Those peptides were known to bind to tumor cells and provoke tumor cell death and tumor regression [5] and we confirmed in our model that bacterial infection was indeed associated with an increase in tumor cell death.

We concluded that naturally occurring bacterial infection can compete with cancer cells through the activation of innate immune responses which induce tumor cell death. The translation of these results to human cancer is supported by the early work of Dr. Coley who found that patients who had been injected with two strains of live bacteria showed spontaneous remission [6] but also by the recent success of Bacille Calmette Guerin vaccine as a therapy for bladder cancer [7]. Thus, our study places a new emphasize on the relevance of harnessing the power of innate immunity to treat cancer.

More generally, we propose that the role of infections should be investigated in every aspects of cancer from the competition between infection and cancer cells to the competition between infectious agents and oncogenic virus [8]; from their impact on prevention to their influence on therapeutic strategies [9]; and from the protection they confer to tumor in the micro-environment [10] to the selection of biological mechanisms in pathogen-rich environment that increase natural susceptibility of some populations [11]. 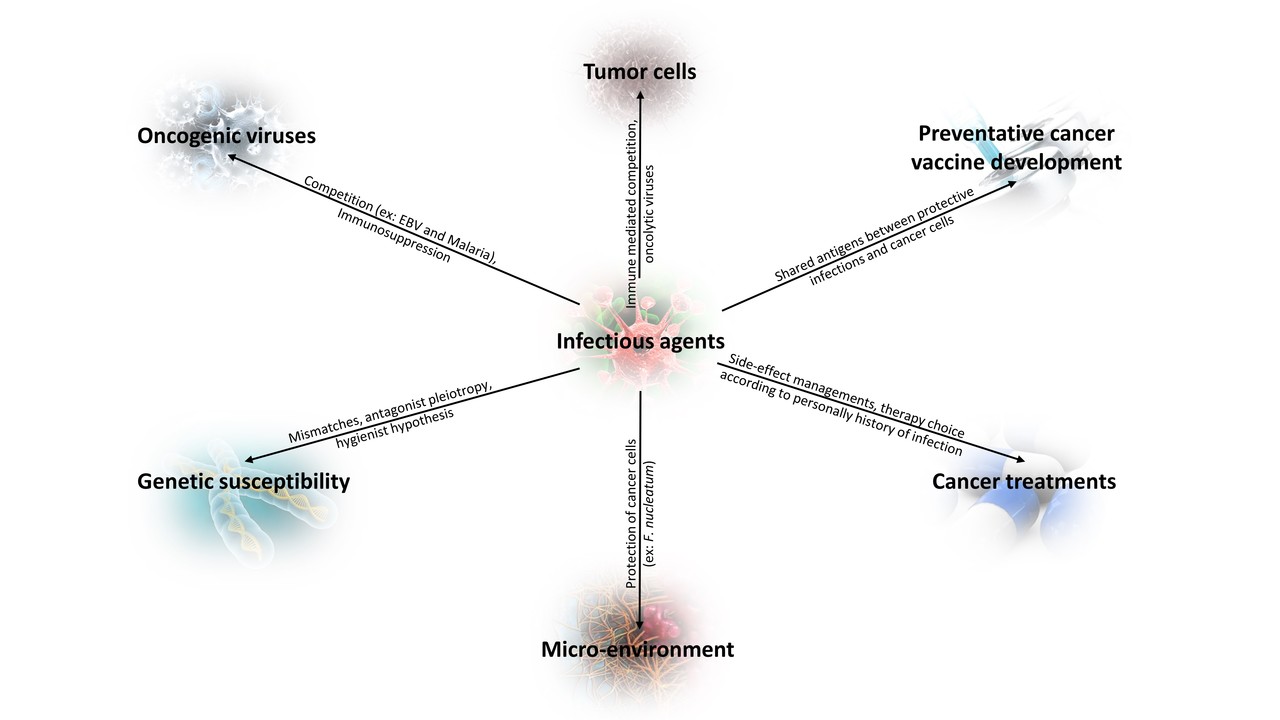