Nasopharyngeal carcinoma (NPC) is a distinct type of head and neck cancer, which features with the infection of Epstein-Barr virus (EBV) and a high incidence across Southern China and South-eastern Asia. In recent years, the overall survival rate of nasopharyngeal cancer patients has been improved with the advancement of radiotherapy and chemotherapy technology. Nevertheless, more than 10% of patients develop recurrent and metastatic NPC (Chen et al., 2019). A limited proportion of patients benefit from the targeted therapy with an inhibitor for epidermal growth factor receptor (Chan et al., 2005) or immunotherapies using the immune checkpoint blockade (Hsu et al., 2017; Ma et al., 2018). These variations in treatment responses and survival outcomes indicate the heterogeneous nature of NPC. Previous studies have revealed the molecular basis of the heterogeneity of tumour cells from the susceptible population genetics, tumour genomics, and EBV infection in NPC. However, the composition of diverse immune and stromal cell populations has not been well illustrated in tumour microenvironment (TME) of NPC. Therefore, it is essential that understanding the heterogeneity of cellular composition and dynamic changes of TME, which allows the discovery of mechanisms underlying treatment resistance and new therapeutic targets for patients with NPC.

In this study, we aimed to provide a comprehensive global view of tumour heterogeneity of NPC, by analysing the single-cell transcriptional profiles of 176,447 cells from 10 treatment-naïve patients with NPC. With the combination of T cell receptor (TCR) repertoire information and individual tumour-blood sample pairs, we further characterized the clonality and migrations of T cells. In addition, we generate a potential cellular interaction network of cell populations in the TME of NPC.

The TME of NPC showed a higher degree of immune cell infiltration than other cancers. We identified multiple immune cell types, including CX3CR1+CD8+ T cells with high cytotoxicity and migration ability, TNFRSF4+ Treg cells with immune-suppressive function, and mature LAMP3+ DCs with decreased antigen presentation capability and increased immune regulatory capability. Then, we constructed the expansion, migration, and transition trajectory of immune cell between peripheral blood and tumour via the expression profile and TCR information. Importantly, the CX3CR1+CD8+ T cells in peripheral blood shared TCR clonotypes with tumour infiltrating CD8+ T cells, which are responsible for recognizing antigens. Our findings raise possible T cell therapies for NPC by infusing the CX3CR1+CD8+ T cells from peripheral blood after ex-vivo expansion or engaging chimeric TCR of T cells with CX3CR1 chemotactic potential towards tumour site.

EBV infection is the key feature of NPC in the endemic regions, and its role in malignant transformation and tumorigenesis has been implicated in NPC (Young and Dawson, 2014). We identified two groups of malignant cells with or without EBV infection in NPC tumours. The EBV+ malignant cells showed a distinct transcriptional state compared to the EBV- malignant cells, with the specific activation of major genes implicated in EBV entry and cancer-related pathways, such as NF-κB and Notch pathways. Moreover, the signalling pathway enrichment analyses revealed that the apoptosis pathway were enriched in EBV+ malignant cells, but the cell proliferation related pathways were enriched in EBV- malignant cells. Combined with the signature of cell cycle associated with the poor prognosis of NPC (Zhang et al., 2017), EBV- malignant cells may be related to the recurrence and metastasis of NPC. Given that all endemic NPC are EBV positive, our findings are of particular interests for future studies on the role of EBV infection in NPC development and the persistence of EBV in body cells compared to its gradual loss during in vitro culture.

The infiltrating immune and tumour cells do not present independently and statically, but undergo complex and dynamic interactions in the TME, which jointly contribute to tumour progression. Our study revealed an intercellular network among LAMP3+ DCs, Treg cells, and exhausted CD8+ T cells in NPC, suggesting potential cross-talks among multiple immune cells to foster an immune-suppressive niche for the TME of NPC. LAMP3+ DCs were predicted to interact with naïve Treg cells in peripheral blood through CCL17-CCR4 and CCL22-CCR4. TNFRSF4+ Treg cells had high expression of CTLA4, ENTPD1, and CSF1, which showed ligand-receptor bindings to CD80/CD86, ADORA2A and SIRPA on LAMP3+ DCs. LAMP3+ DCs were also predicted to interact with exhausted CD8+ T cells through CD200-CD200R signalling, a non-classical immune-suppressive pathway involved in the suppression of anti-tumour responses (Liu et al., 2020). Between malignant NPC cells and immune cells, we observed that EBV+ malignant cells had significantly more receptor-ligand interactions than EBV- malignant cells in NPC patients. We noted that EBV+ malignant cells uniquely expressed CX3CL1 in tumour, which was predicted to interact with CX3CR1 expressed on peripheral immune cells including CD8+ T cells, dendritic cells, NK cells, and monocytes, suggesting the chemotactic potential of EBV+ malignant cells to immune cells from peripheral blood. Moreover, we observed that EGFR on EBV+ malignant cells was predicated to bind TGFB1 on multiple cell types, which has been reported to regulate the EBV life cycle (Velapasamy et al., 2018). We also observed potential interacting pairs between EBV+ malignant cells with activated Notch pathway and multiple cell types through NOTCH1-TNF and NOTCH2-JAG2, which have been related to radiation sensitivity (Shen and Zeng, 2019) and cancer stem-like side population cells (Yu et al., 2012) in NPC. The specific presence of EBV molecules in malignant NPC cells has been harnessed as an adoptive immunotherapy for NPC using cytotoxic T lymphocyte recognising EBV in clinical trials (Li et al., 2013; Li et al., 2012). We note that the presence of TCRs recognizing EBV antigen among multiple patients with NPC may engage T cells targeting NPC cells with higher specificity. However, it’s noteworthy to explore whether and how the heterogeneous malignant NPC cells especially the EBV negative cells and other subtypes of cells with different proliferative capabilities contribute to the variable treatment outcomes.

Taken together, through uncovering the heterogeneous tumour microenvironment of NPC at a high resolution, we identified the essential cells and molecules with potential contributions to NPC tumorigenesis, and thus provide insights into the mechanisms underlying NPC progression and the development of potential therapeutic strategies for NPC. In the future, we will devote ourselves to studying the spatial structure and dynamic changes of the tumour microenvironment. 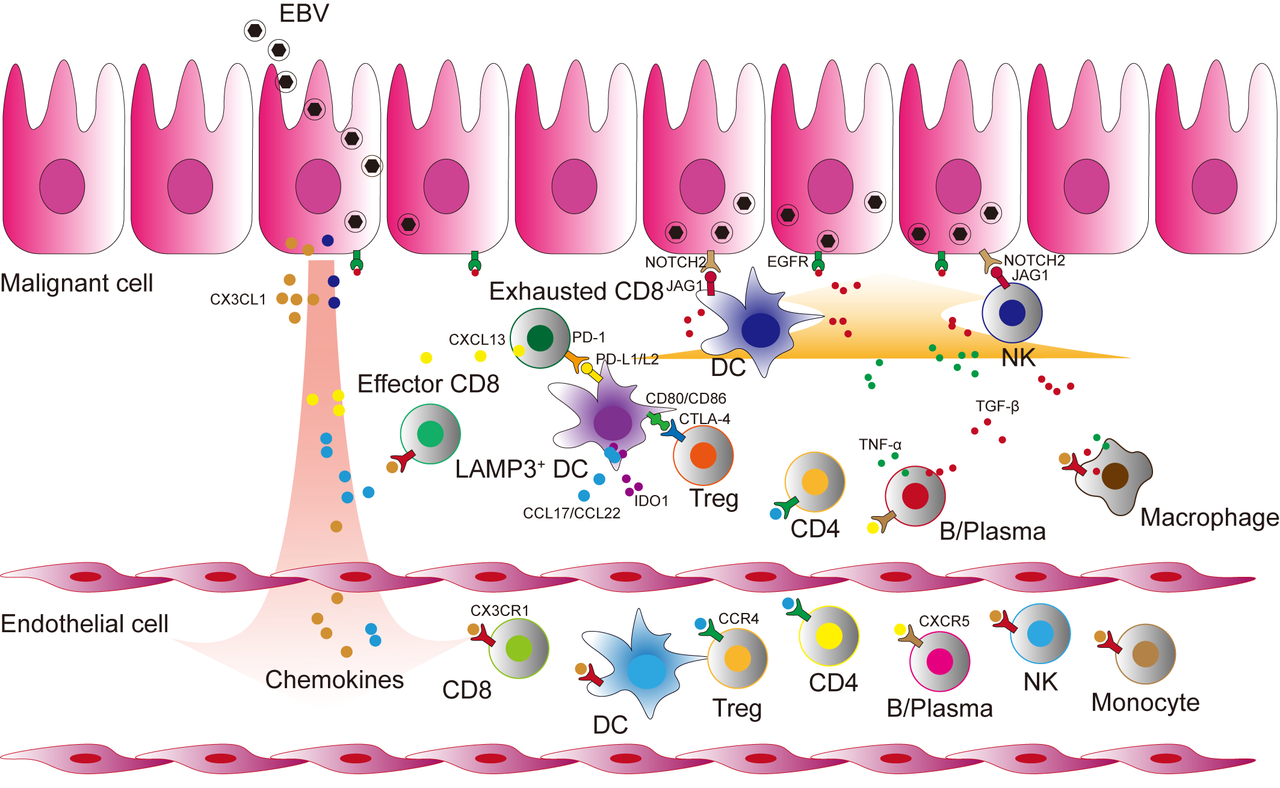