The story of walking on a resistant trail: TRAIL-resistance in GBM

Working with Tumor Necrosis Factor–Related Apoptosis-Inducing Ligand (TRAIL) was a long story in my academic life. My master’s thesis was about TRAIL-induced cell death; however, I fell into it deeply during my PhD studies. I conducted my PhD research at Koç University Research Center for Translational Medicine (KUTTAM), Istanbul, Turkey. Under the supervision of Dr. Tugba Bagci-Onder, I worked on a very aggressive type of brain tumor, glioblastoma (GBM), most common and aggressive primary brain tumor. Despite the advances in the diagnostic, surgical and conventional treatment approaches, the survival rate of GBM patients remains below 20 months after diagnosis. Therefore, new therapeutic options need to be explored for such deadly cancer types. A prime therapeutic candidate is TRAIL, because it induces apoptosis specifically in tumor cells. However, as we also observed in our work, GBM cell lines display very heterogeneous responses to TRAIL. To dissect out the mechanisms of TRAIL response, we started on a long journey, first wondering whether we could select stably TRAIL-resistant cells starting from a TRAIL-sensitive source. With this curiosity, we performed a dose-escalation method and started with adding low doses of TRAIL on sensitive cells. Every time we saw that little number of cells were surviving and increased the TRAIL doses, to expand the survivors.  After weeks, if not months, of hard work, we were able to select TRAIL-resistant cell populations through chronic and long-term TRAIL exposure.  Demonstrating this persistent resistance with several in vitro and in vivo experiments was a joyful ride in the lab.

Afterwards, we asked the next question: is this resistance reversible? Among the known TRAIL-sensitizers, proteasome inhibitor Bortezomib, was the most effective in overcoming resistance in multiple cell line models we generated. This was partly achieved through upregulating death receptors and pro-apoptotic proteins, and downregulating major anti-apoptotic members, Bcl-2 and Bcl-xL. We showed that CRISPR/Cas9 mediated silencing of DR5 could block Bortezomib-mediated re-sensitization.

We next explored the underlying mechanisms of acquired TRAIL-resistance by applying RNA-sequencing on TRAIL-sensitive and TRAIL-resistant cell line pairs. This was very exciting, as there were high number of differentially expressed genes (DEGs) and pathways in our models. We could ultimately generate a TRAIL-resistance signature and followed up the roles of hit genes by functional experiments. Using overexpression or gene depletion by CRISPR/Cas9 system, we were not able to pinpoint a single gene responsible for resistance. However, when we used a chemical approach and targeted the system at a signaling pathway level, we demonstrated that NF-kB pathway was very influential in the maintenance of TRAIL resistance.

We prepared and submitted my manuscript to Oncogene in May 2019, which was our first journal of choice. While we were waiting for reviews, I defended my thesis and took on a postdoctoral position in Dr. Bagci-Onder’s Lab (as we call it: the TBO Lab). Finally, we were thrilled to see that the reviews were very positive and encouraging.

I was efficiently doing in vitro and in vivo experiments suggested by the Reviewers, everything was going according to the plan. But then, things suddenly changed: Covid-19 pandemic has started, and our labs were shut down for months. When they were finally opened, shipment, ordering and receiving reagents became a challenge. Then, my advisor, Dr. Tugba Bagci-Onder, got diagnosed with invasive breast cancer and she started a big fight with it, which she finally won. Ultimately, after more than a year, we are back to being close to “normalcy” and are celebrating the publication of our story in Oncogene. Oncogene was definitely the right journal choice, as it granted us extensions when we needed.

In conclusion, our article describing the mechanisms behind TRAIL-resistance showed several things: One that is scientific: that different TRAIL-resistant populations can be generated from GBM cell lines and that the resistance is maintained and heritable, serving as new models for studying apoptosis in cancers. One rather unscientific: that we could overcome obstacles and difficulties in the midst of a pandemic and a fight with cancer, and that we, as TBO Lab, stayed together more motivated and resilient than ever. We hope that our work will be of interest to other scientists in the field. 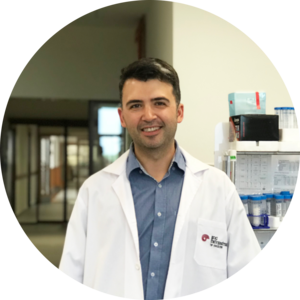