The "sweet" crosstalk between marrow stroma and malignant cells

The bone marrow (BM) niche is an essential microenvironment where hematopoietic stem cells maintain their cell status and respond the regulatory signals from bone in different physiological conditions1. It is also the place where the overgrowth of hematological malignancies occurs. BM stroma, as one of the pivotal contributors, plays an important role in regulating the cellular processes including quiescence, differentiation, proliferation, maturation and apoptosis of hematopoietic stem cells. It can be remodeled by hematological malignant cells to generate a protumoral surrounding. Therefore, the crosstalk between marrow stroma and malignant cells contribute notably to disease development.

Glycosylation is the most common post-translational modification of proteins, and sugar chains are mostly attached on proteins and lipids on cell membranes. As the first barrier of cell surface, sugar chains participate in molecular recognition and signal transduction. The BM microenvironment of hematological malignancies is often accompanied by abnormal glycosylation modification, but how this abnormality further regulates the behavior of malignant clonal cells still remains unclarified. ­­­­­­­

Our lab is committed to understand the role of some typical glycosylation modifications such as O-GlcNAcation, bisecting GlcNAcylation and fucosylation in determining tumor initiation and progression and to provide scientific basis for novel clinical diagnosis and treatment. In the past years, our group demonstrated bisecting GlcNAc glycans (β1,4-linked GlcNAc attached to core β-mannose residue, catalyzed by MGAT3) on small extracellular vesicle (sEV) diminishes its pro‐metastatic function in breast cancer2. In this study, we observed decreased levels of MGAT3 and bisecting GlcNAc in BM stroma of patients with myelodysplastic syndrome (MDS) and acute myeloid leukemia (AML). Low bisecting GlcNAc levels in stromal cells promote proliferation of hematopoietic clonal cells. Mechanically, malignant clonal cells can enwrap miR-188-5p into exosomes, one type of sEV, and deliver miR-188-5p to recipient stromal cells, where it reduced MGAT3 expression and bisecting GlcNAc level.

Interestingly, we further identified MCAM as a bisecting GlcNAc-bearing target protein in stromal cells. MCAM was originally identified in human melanoma as an adhesion molecule glycoprotein, and it now is considered as a typical marker associated with BM niche3. Our 2013 study indicated that high MCAM expression in stromal cells facilitated engraftment of cloned MDS patient cells in a mouse xenotransplantation mode4. We here observed that high MCAM expression in stromal cells supported myeloid cell proliferation both in vitro and in vivo.

Bisecting GlcNAc appeared to interfere with MCAM distribution on cell membrane by degradation of MCAM via lysosomal pathways. IP-MS analysis identified Asn 56 on MCAM as the key bisecting GlcNAc-bearing site. Promoting effect on malignant clonal cell proliferation in vitro and in vivo was weaker for glycosylation-deficient N56D mutant of HS5 (HS5-MCAM-Mu) than for HS5-MCAM. Knockdown of N-glycosylation at Asn 56 reduced MCAM localization on cell membrane, indicating that such localization depends on other N-glycan structures not yet identified.

In regard to functional mechanism, we found that MCAM on stromal cell membrane supported malignant clonal cell growth through interaction with the transmembrane aminopeptidase CD13. CD13 is widely expressed in myeloid cells, stromal cells and other cells5. It is overexpressed in many tumor cells and functions in tumor angiogenesis, invasion, metastasis and multidrug resistance. We observed that elimination of bisecting GlcNAc on MCAM by Asn 56 mutation, or by bestatin (a specific inhibitor of CD13) treatment, notably reduced CD13 binding, inactivated ERK signaling, and suppressed myeloid cell growth. The supportive function of stroma on clonal cell growth therefore appears to depend on interaction between MCAM on stromal cells and CD13 on clonal cells. 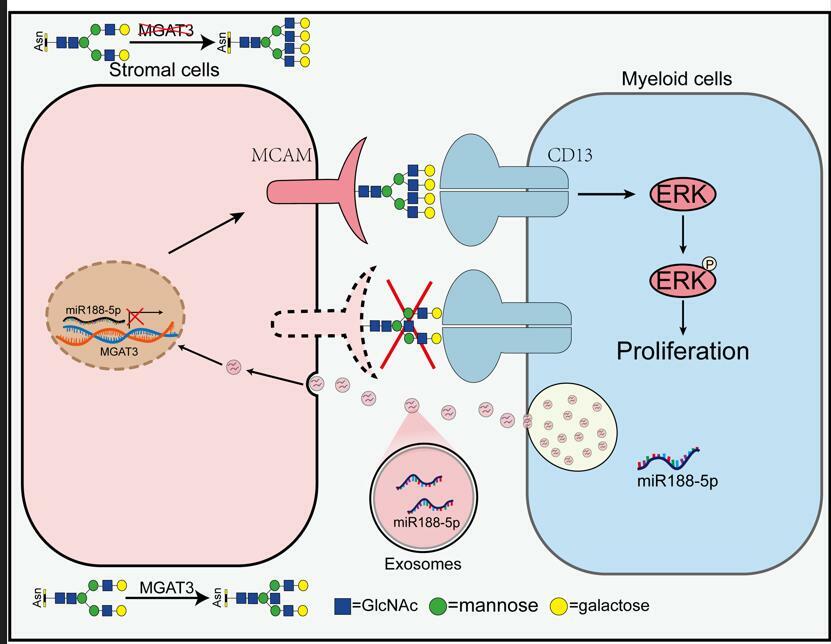 The "sweet" crosstalk between marrow stroma and malignant cells