Our study highlights an alternative, non-canonical tumor-promoting role of STING that opposes its well-documented function in tumor immunosurveillance.

+2
GOFFIN Vincent and 2 others View all
Research Director, Inserm
Follow 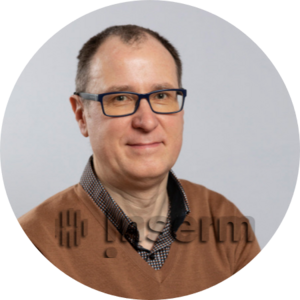 This collaborative project started 10 years ago when the team of Dr Stefano Cairo (Xentech company) discovered that activation of IFN/STAT1 signaling in breast cancer PDXs a few days after chemotherapy (anthracyclin/cyclophosphamide) predicted the ultimate tumor response to treatment (1). To investigate the molecular mechanism triggering IFN/STAT1 signaling in breast cancer cells, Dr Cairo initiated a collaboration with the Inserm laboratory of Dr Vincent Goffin who has been long interested in the contribution of JAK/STAT pathway to breast tumorigenesis. Using various breast cancer in vitro models including classical cell lines and PDX-derived cells generated at Xentech, we could show that chemotherapy-induced IFN/STAT1 signaling was triggered by a cell-autonomous mechanism: genotoxic treatment induces type I IFN expression leading to autocrine activation of STAT1 signaling (2).

In 2015, our preliminary results were presented by Julie Gaston (PhD student) and Laura Cheradame (undergraduate student) at the annual scientific meeting of the Necker campus. The Necker site houses several top teams in the immunology field, some of which are focused on interferonopathies. During the poster session, fellows from Dr F. Rieux-Laucat's group suggested to investigate the involvement of the STING pathway in IFN secretion by breast cancer cells. We had never heard about this protein, with good reason as STING (Stimulator of Interferon Genes) is a key adaptor protein of the innate immune response to cytosolic DNA. Upon infection, STING is activated by cyclic dinucleotides generated by cGAS in response to pathogen-derived DNA and triggers TBK1 kinase-mediated phosphorylation of the transcription factor IRF-3 (IFN regulatory factor-3), which ultimately results in transcriptional activation of IFN genes (3, 4). After investigating our breast cancer models as recommended by immunologists, we could demonstrate that chemotherapy triggered the exact same cGAS/STING/IFN pathway, except that the switch is not pathogen DNA, following chemotherapy treatment (2).

In the frame of these investigations, cell fractionation experiments suggested that STING partly resides in the nucleus of breast cancer cells. This was unexpected as STING is mostly described as a transmembrane protein primarily residing in the endoplasmic reticulum. Immunofluorescence analyses suggested that chemotherapy triggered the formation of STING foci inside the nucleus, a result that was supported by the reduction of foci number upon STING silencing (2). Unfortunately, immunofluorescence observations turned to be totally misleading as we could demonstrate that the commercial anti-STING antibody used for these studies cross-reacted with 53BP1 (p53 Binding Protein 1). This is to say that the presumed STING foci were actually 53BP1 foci (5). These artefactual observations saddened our PhD student Laura who was seeing the end of her training rapidly approaching. Still, cell fractionation (using a validated anti-STING-specific antibody) did show that STING resides in part in the nuclear fraction of breast cancer cells. In science, important discoveries are more often achieved by the rightful interpretation of odd results than by the validation of brilliant hypotheses: the fact that STING silencing hampers 53BP1 foci formation was intriguing as the latter is an early hallmark of the DNA damage response, a network of cellular pathways that sense, signal and repair DNA lesions. This suggested that STING may be involved in DNA integrity maintenance in breast cancer cells. Worth to investigate further!

This hypothesis has now been confirmed in the enclosed Oncogene paper by Cheradame et al. Using various experimental approaches, including electronic microscopy, we found that a part of the cellular STING pool resides at the inner membrane of the nucleus of breast cancer cells. This subcellular localization was confirmed in patient tumor samples using immunofluorescence (and a validated anti-STING-specific antibody). The nuclear STING interactome contains several proteins involved in the DNA repair machinery, including the DNA-PK complex. We confirmed that STING promotes the DNA damage response and prevents DNA break accumulation, resulting in increased cell survival both in steady-state and in the presence of genotoxic agents (chemotherapy). A key finding is that these cell-autonomous properties of STING are independent of the canonical pro-inflammatory, cGAS-mediated pathway.

In line with its role as a promoter of anti-tumor immunity, STING is generally viewed as a good guy in the battle against cancer cells. Accordingly, high intratumor levels of STING are correlated with good prognosis in various cancers. Together, these findings have supported the emergence of therapeutic strategies involving STING agonists with the aim to enhance antitumor immunity (6). In contrast, our study suggests that in cancer cells (as opposed to immune cells), STING may be a bad guy, contributing to DNA damage response, cell survival and ultimately resistance to chemotherapy. Strikingly, while STING expression level positively correlates with patients’ survival when looking at the whole breast cancer patient population, in patients receiving adjuvant chemotherapy, high STING expression is associated with increased risk of relapse. We speculate that, in the context of high chromosomal instability (e.g. induced by chemotherapy), the pro-tumoral, inflammatory-independent effects of nuclear STING may prevail over the anti-tumoral, inflammatory-dependent effects of cytoplasmic STING. Exploring the balance between these two opposite actions of STING, that mobilize alternative subcellular mechanisms in different cell subsets, is crucial to decipher its actual role in cancer. The development of appropriate experimental models is required to understand the relative contributions of the GOOD (immune cell STING) and the BAD (cancer cell STING) in the UGLY (the tumor) and to identify therapeutic approaches that would block STING function as DNA damage repair facilitator while maintaining its role as immune system booster. 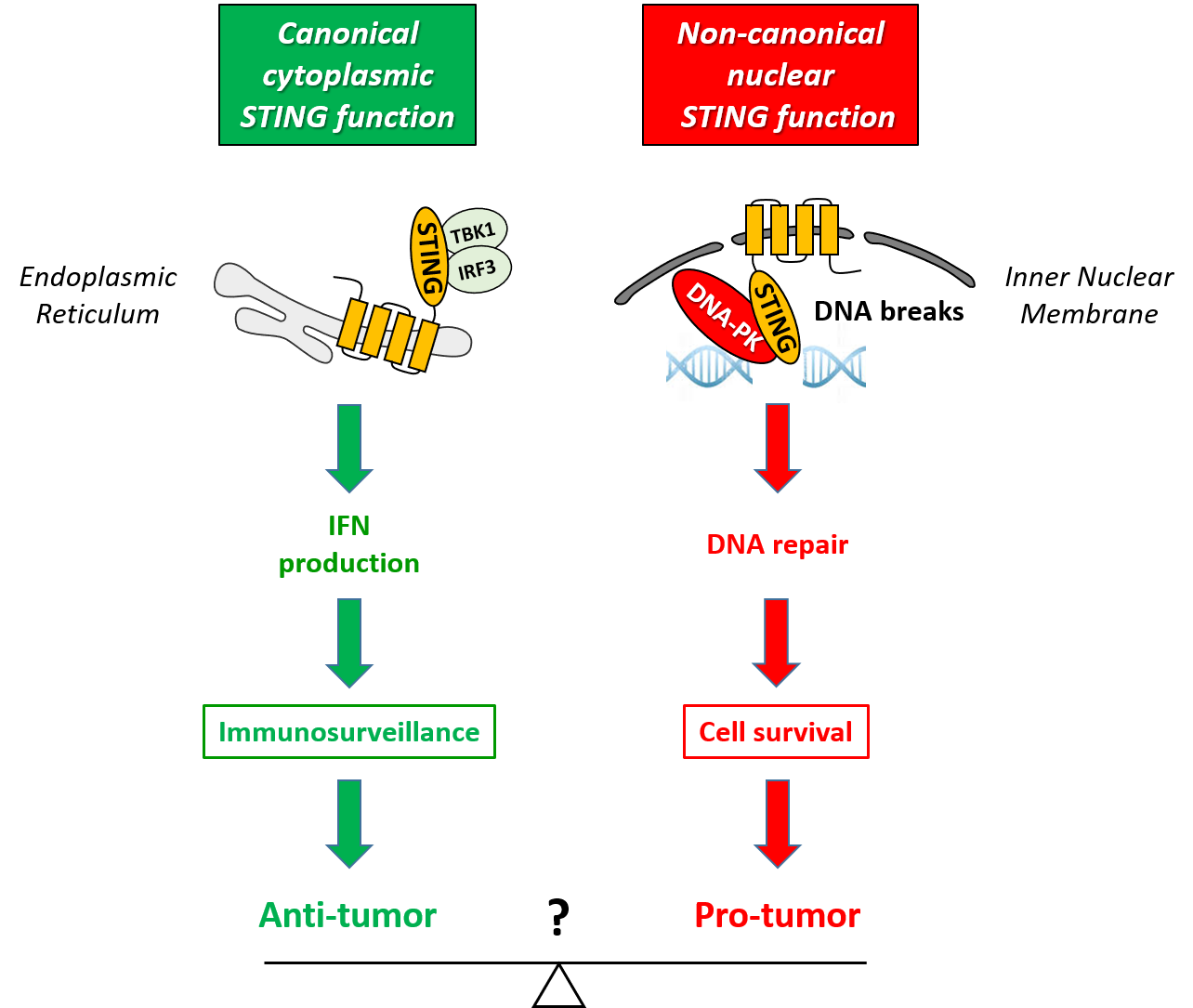 Historical interest in prolactin pathophysiology, including its role in breast and prostate cancers.

We recently discovered, isolated and characterized castration-resistant luminal progenitors in the mouse prostate, and we investigate their potential contribution to prostate tumorigenesis.