Chronic myeloid leukemia (CML) is a hematopoietic malignancy that is initiated by the hematopoietic stem cell (HSC) compartment as soon as this acquires the Bcr-Abl translocation. HSCs that express the BCR-ABL oncoprotein are subsequently defined as leukemic stem cells (LSCs) in chronic phase CML. This disease is a prime example for the success of a target-directed therapy but it likewise reveals the limitations of such strategies.

In 2001, a phase 1 clinical trial unravelled the potential of a molecular targeted therapeutic approach to induced high response rates in CML patients1. The subsequent implementation of the tyrosine-kinase-inhibitor (TKI) imatinib into CML therapy was a huge success story. Today, even the acquisition of mutations within the Abl kinase that induce imatinib resistance may often be overcome by so called second and third generation TKIs. Collectively this results in an overall survival of CML patients that approaches the life expectancy of the general population2. Despite these successes, the majority of patients still requires lifelong TKI therapy. Even in patients who remain in deep molecular remission for at least 2 years, TKI discontinuation usually results in molecular relapse in half of this selected patient cohort, mostly within the first 6 months after TKI stop3. This is primarily due to resistant LSCs that can persist despite Bcr-Abl inhibition and eventually lead to clinically measurable relapse of the disease4, 5. Central aim is now to increase the proportion of patients that remain in “treatment free remission” (TFR) and therefore current research focuses on the mechanisms that mediate LSC resistance and/or persistence. Varieties of cell intrinsic and cell extrinsic mechanism have been described. Occasionally, these observations have led to the initiation of clinical trials but successful implementation of new, e.g combination strategies into routine clinical application could not be achieved so far.

Aiming to identify a putative Achilles heel in LSC resistance, we here employed CML retroviral and transgenic mouse models, murine and human CML cell lines, as well as primary patient-derived cells, including quiescent CML stem cells. First, we identified increased FcγRIIb cell surface expression in murine stem and progenitor cells in a transgenic CML mouse model. Elevated FcγRIIb expression was likewise confirmed in CML CD34+ cells and neither in murine nor in human cells TKI treatment could revert increased FcγRIIb levels. Both, genetic depletion or shRNA-mediated FcγRIIb knock-down reduced the clonogenic capacity of murine cells in vitro and decreased LSCs in vivo. Subsequently, we identified Bruton’s tyrosine kinase (BTK) as downstream mediator of FcγRIIb-signaling as BTK protein phosphorylation was absent in FcγRIIb-depleted malignant cells but could be restored upon reconstitution of the receptor. Likewise, forced FcγRIIb expression could compensate for reduced CFU potential that we observed upon FcγRIIb depletion in malignant cells. We proceeded to inhibit BTK using a specific inhibitor, namely ibrutinib alone or in combination with imatinib and studied the effect in CML-derived MNCs, CD34+ and CFSEMax/CD34+ cells. Simultaneous administration of ibrutinib and imatinib was superior in reducing the clonogenic potential of CML-CP patient derived MNCs and primitive CD34+ cells compared to single TKI application. Moreover, Bcr-Abl inhibition combined with ibrutinib treatment increased apoptosis in quiescent CML-CP LSCs.

Figure 1: Elevated FcγRIIb expression in malignant cells persists despite BCR-ABL inhibition and this could be mediated via inflammatory cytokines in the CML microenvironment. FcγRIIb-activity results in increased BTK expression and phosphorylation and dual targeting of BCR-ABL and BTK activity induces apoptosis in LSCs.

Our work provides pre-clinical evidence to implement BTK inhibition in CML therapy. The next obvious important step will now be to test this approach in a clinical trial. As the FDA-approved BTK inhibitor ibrutinib is already implemented into routine clinical application, one could envision a rapid translation. As a potential scenario, short-term ibrutinib treatment could be applied to patients who are already eligible for TKI discontinuation due to long-term duration of deep molecular remission. In these patients, ibrutinib could either replace Bcr-Abl-directed TKI therapy or be administrated together with Bcr-Abl inhibition for a defined period. Molecular monitoring in close time intervals during and after therapy discontinuation could then unravel if the proposed strategy could help to overcome current limitations of the target-directed therapeutic approach in CML. 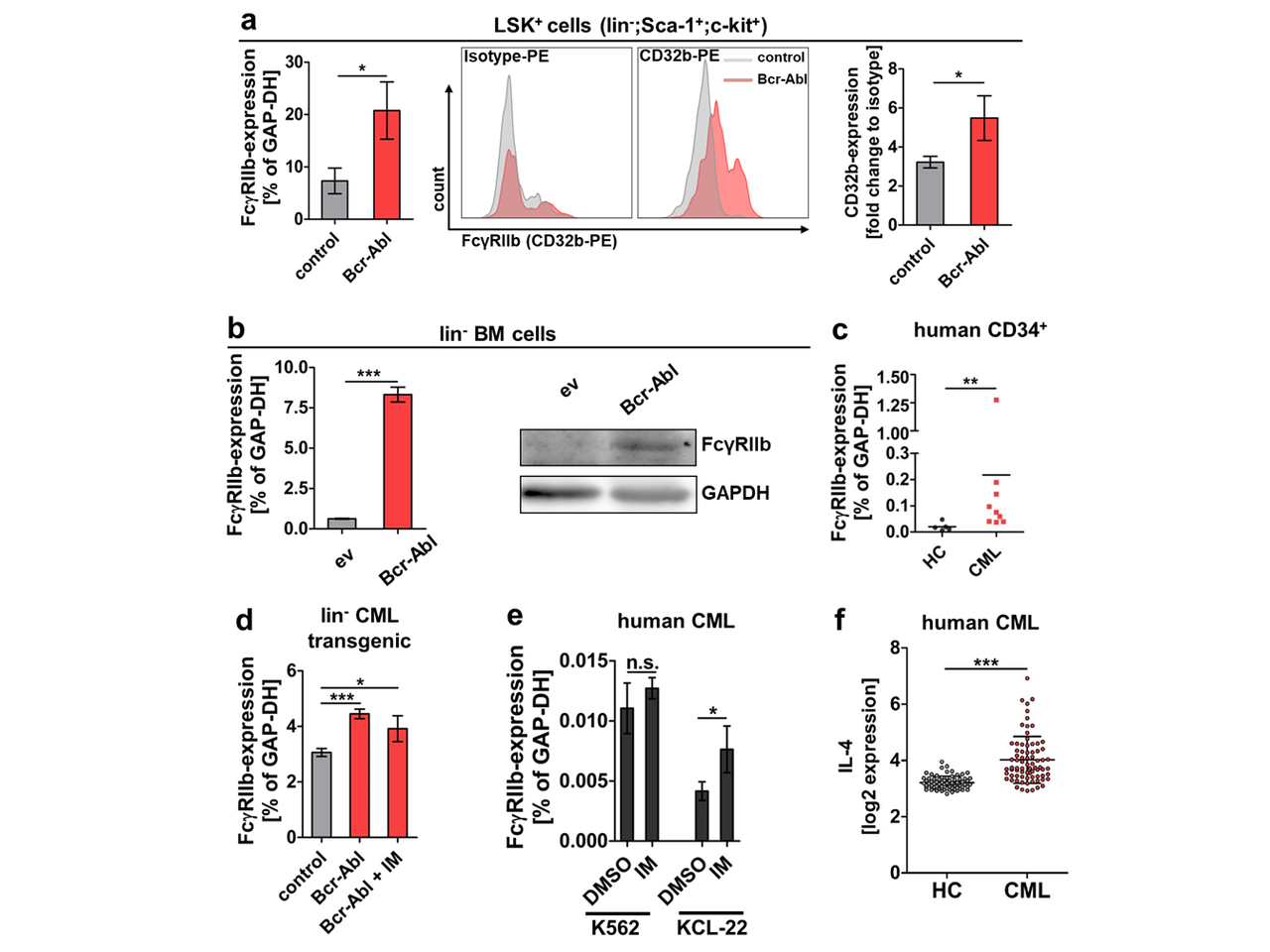