A community from npj Precision Oncology
Contributor BMC
After the Paper

Each year in Europe alone, around 3,000-5,000 pregnant women get a cancer diagnosis, which can require treatment during pregnancy. We need to know the long-term effects of treatment, particularly effects on the exposed fetus that could have consequences on the health of the individual after birth.
Norah Spears and Agnes Stefansdottir
2 contributors
Liked by Evelina Satkevic and 2 others

Background As with many anti-cancer drugs, the topoisomerase II inhibitor etoposide is considered safe for administration to women in the second and third trimesters of pregnancy, but assessment of effects on the developing fetus have been limited. The purpose of this research was to examine the eff…

In 2016, our paper on ‘Etoposide damages female germ cells in the developing ovary’ was published in BMC Cancer. The paper explored the effects of the topoisomerase II inhibitor etoposide, a chemotherapeutic which can be given to pregnant cancer patients, on the germ cells which would be developing within any female fetus during the pregnancy. Using a mouse model, we found that etoposide damaged ovarian germ cells at very early stages, prior to formation of the ovarian follicles in which the germ cells grow and mature, but that exposure to the same, or even higher concentration of etoposide had no effect on these germ cells after the follicles had formed. This suggests that the precise timing of treating any pregnant woman with etoposide may be a crucial factor in determining the extent to which the future fertility of an exposed fetus may be affected.

So what happened after our paper was published?

The paper received considerable attention in various news outlets (Altmetric – Etoposide damages female germ cells in the developing ovary) which I had not really expected. The reason I had initially stumbled into this area of research was something of a chance effect, as a consequence of the focus of my PhD, in which I was examining other types of topoisomerase II inhibitors, and their effect on female fertility. When I then started exploring the literature I was astonished to find that next-to-no research had been carried out to determine whether chemotherapy drugs, such as etoposide, could affect the future fertility of the exposed fetus. I was even more surprised to find out that chemotherapy treatment is considered safe to administer to pregnant women after the 1st trimester, despite the understanding that many chemotherapy agents can have damaging effects on fertility of children and young people with cancer. That discovery then lead me down this research path, since it seemed to me to be an important gap in this field. Therefore, I was delighted that the paper received so much interest in the media, since that interest would further help to highlight the gap, and explain to people why it is important for scientists and clinicians to explore this area further.

This was my first publication on which I was the first author, and I went on to present the findings from the paper at the annual Society of Reproduction and Fertility conference in 2016, winning their postdoctoral prize for that talk. This prize included a round trip to Australia to present my findings at the annual conference of the Society for the Study of Reproduction in Perth the following year, a fantastic experience, and also my first time visiting Australia.

I now have a lectureship, as part of which I am continuing to work on this topic: indeed, this has become the focus of my current research.

I think that there are two consequences of the research project published in this BMC Cancer paper that stand out to me.

Firstly, for me this work began as part of the PhD project of my then graduate student, Agnes Stefansdottir. Agnes is the first of my PhD students with whom I have then gone on to collaborate as they have gained research independence, in this case with Agnes starting a Lectureship at the University of Edinburgh. Watching the careers of previous PhD students develop in the years after graduation is always very fulfilling, one of the highlights being a supervisor. Continuing to work with that person as has happened here, and doing so on a topic that has stemmed from that PhD project has been particularly rewarding.

Secondly, despite the fact that the need to administer chemotherapy treatment to pregnant women is, luckily, uncommon – estimates are that this will only happen in around one in a thousand pregnancies – I have been surprised to find that there have been a couple of occasions where I have met people with a personal link to this situation. Probably because the topic has not gained much general attention until recently, people caught up in this situation are particularly keen to discuss what the ramifications might be, and what it might be helpful to do. This very much brings the research topic to life, powerfully highlighting the need for the work to continue.

Since the publication of our BMC Cancer paper, we have both been very pleased to see that the importance of this topic is gaining increasing recognition. One result of this is that we now have links with other scientists and with clinicians who work with pregnant cancer patients, leading to us becoming part of a collaboration of research groups across Europe. 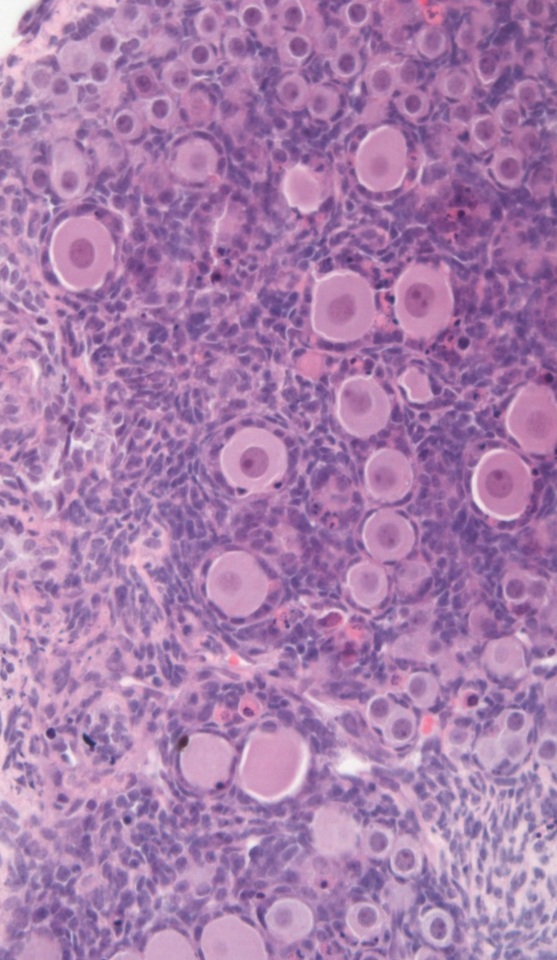 Each year in Europe alone, around 3,000-5,000 pregnant women get a cancer diagnosis, which can require treatment during pregnancy. We need to know the long-term effects of treatment, particularly effects on the exposed fetus that could have consequences on the health of the individual after birth.