Aberrant angiogenesis underlies the pathogenesis of many human diseases. Anti-angiogenic therapy has been widely used in the clinical treatment of various types of cancer and eye conditions such as age-related macular degeneration1. For example, since the FDA's approval of bevacizumab (a VEGFA neutralizing monoclonal antibody) in 2004, it has been continuously reported as a top drug by sales and obtained $7.1 billion in 2019 sales (as the top 4th monoclonal antibody therapeutics)2. Recent clinical results further demonstrate its potential to enhance immunotherapy in metastatic solid tumors3. However, the clinical benefit of anti-angiogenic therapy is largely limited by the highly variable and unpredictable patient response and inevitable resistance due to a lack of quality biomarkers and knowledge of resistance mechanisms4.

Patient response to anti-angiogenic therapy is highly complex because multiple cell types including endothelial, immune, stromal, and cancer cells could respond to angiogenic factors such as VEGFA4. Dynamic interactions between these cell types add further complexity4. At the core of angiogenesis, microvascular blood endothelial cells (ECs) represent a major cellular target of anti-angiogenic therapy. Given that they are also important in promoting disease progression and shaping therapeutic responses, deciphering the role of ECs can be a key to understand why individual patients respond so differently and how resistance occurs and/or develops4.

To uncover the role of ECs and their response modifiers to anti-angiogenic therapy (bevacizumab in our study), a discovery strategy using pooled genetic screening is the most appropriate by virtue of its high-throughput, systematic and unbiased feature. However, we faced a couple of hurdles to achieve this. Firstly, VEGFA-dependent conditions were essential because bevacizumab indirectly targets ECs by sequestering human VEGFA and fetal bovine serum in the normal growth medium would confound the effect of bevacizumab thus render the results nonspecific. We, therefore, optimized a chemically defined endothelial serum-free medium to address this. Secondly, ECs are large-in-size, slow-growing, sensitive, and phenotypically faithful; therefore difficult to culture in vitro at a large scale. In a pooled genetic screen that usually has a high demand for cell numbers, it is challenging for conventional 2D monolayer culture to meet this need. As a result, pooled genetic screening has rarely been reported in ECs. To address this, we explored 3D microcarrier-based culture for ECs. We successfully established a 3D culture system for in vitro large-scale EC cultivation that was able to promote EC proliferation as well as simulate in vivo conditions such as shear stress and migration. Importantly, dynamic cell migration between microcarriers solved the critical issue of low seeding efficiency under serum-free conditions because cell detachment can be avoided (this would be necessary for 2D culture). In addition, we evaluated CRISPR–Cas9 in our EC model and established efficient lentiviral transduction in the 3D culture system. Combining these key elements, we enabled the first 3D CRISPR screen in ECs to examine their response to bevacizumab in vitro.

Through the 3D CRISPR screen, we identified several candidates that may either mediate resistance or sensitize ECs to bevacizumab. Among these, we validated BRD2, BRD3, BRD4, TAKO1, ACTR2, and TRRAP loss-of-function as resistance mediators while TLK1 and TLK2 loss-of-function as sensitizers using an EC-multicolor competition assay. The biological roles and available small-molecule inhibitors for these targets are shown in the attached figure below. Additional validation for BET proteins (BRD2/3/4) using small-molecule pan-BET inhibitors JQ1 and I-BET762 confirmed results from the screen and EC-multicolor competition assay.

New link between epigenetics and anti-angiogenesis

In agreement with the previous findings, we showed that BET inhibition strongly suppressed key EC activities such as survival and/or proliferation, cell cycle progression, and migration whereas we demonstrated that BET inhibition conferred EC resistance to bevacizumab. We further observed a previously unreported mitigating interaction between BET inhibition and VEGFA blockade. RNA-Seq analysis of ECs co-treated with bevacizumab plus JQ1 or I-BET762 revealed potential involvements of chromosomal regulation via CDC25B activity for the resistant phenotype. These data provide a new link between epigenetic regulation and anti-angiogenesis.

We showed that BET inhibition caused resistance to bevacizumab but exerted an anti-angiogenic effect on its own. Interestingly, these seemingly counterintuitive results may be explained by a recent Science paper by Gilan et al.5 which investigated the specific functions of the two tandem bromodomains (BD1 and BD2) of BET proteins in cancer and immunoinflammation: selective BD1 inhibition primarily changed pre-existing gene expression associated with cell survival and/or proliferation while selectively inhibiting BD2 specifically altered stimuli-induced gene expression. Thus, it is possible that BD1 inhibition suppressed the EC activities and BD2 inhibition caused the mitigating effects on bevacizumab activity when they were both inhibited by JQ1 or I-BET762 in our system. An interesting future hypothesis could be therefore proposed: selective inhibition of BD2 but not BD1 confers resistance to bevacizumab in ECs. In particular, using a selective BD2 inhibitor may gain extra benefits. As we had attempts using JQ1 for further studies in a mouse model of retinal angiogenesis and ChIP-Seq. These experiments unfortunately failed due to high toxicity and potential lack of specificity, respectively. Hence, selective BD2 inhibition may address these problems to enable further investigation. In addition, we showed that all individual knockdown of BRD2, BRD3, or BRD4 mediated EC resistance to bevacizumab, and only BRD4 knockdown affected cell survival and/or proliferation in the functional cell assays. Due to limited time and resources, we have not investigated the specific roles for BRD2 and BRD3 to confer EC resistance. These would be also potential targets in addition to BD2 inhibition.

The validated targets (shown in the attached figure below) identified from our study play important roles in key biological processes including regulation of transcription, chromatin structure, cell cycle progression, DNA repair, translation, and cytoskeleton. Several targets share common functions in these activities, potentially indicating a common signature for controlling EC response to anti-angiogenic therapy. Further studies on these targets and biological processes could enhance our understanding of resistance mechanisms and facilitate the development of novel biomarkers as well as more effective therapeutic options.

Overall, our study provides useful biological models and technical advances to explore an important clinical problem, which could be applicable to other platforms and systems. Our data offer an entry point for understanding the therapeutic response to anti-angiogenic therapy in ECs and establish a new connection between epigenetic regulation and anti-angiogenesis. These could eventually enable the rational use of anti-angiogenic therapy and/or other therapeutic approaches.

Treatment resistance in diffuse large B-cell lymphoma: where, what and how 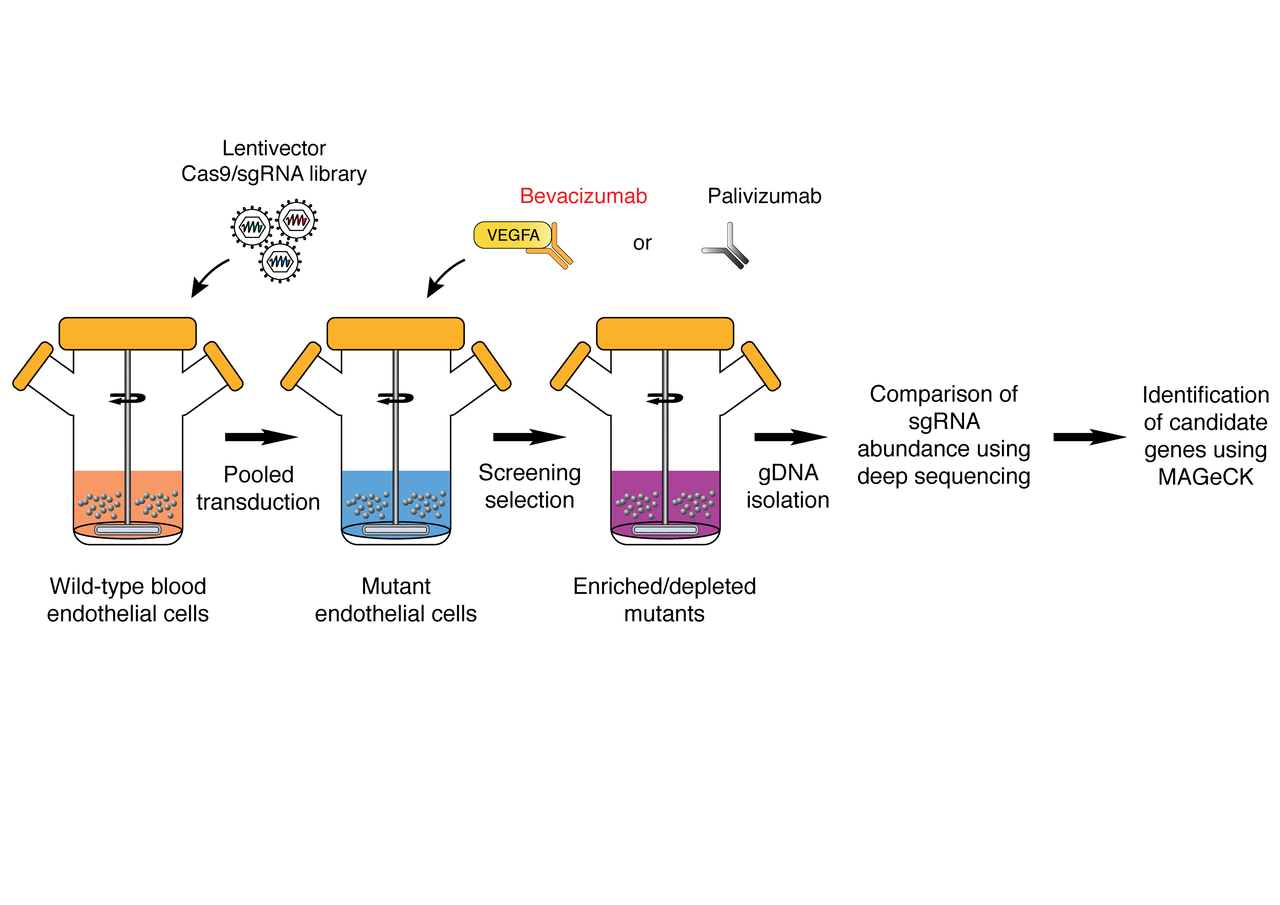