Colorectal cancer (CRC) is one of the most challenging cancers. Despite significant improvements in treatment modalities especially for metastatic disease, almost one million CRC patients succumb every year. Treatment decisions for patients with low grade tumor stage are particularly difficult to make, caused by the unclarity of the prospects of long-term remission for these patients.

During my years as a surgical resident, I treated and operated many CRC patients and became aware of the need to improve and personalize their treatment modalities.

In Prof. Michael Rieger’s laboratory, I had the great opportunity to investigate the pathophysiology of CRC and thus to be involved not only in the clinical, but also in the molecular understanding of CRC. At the beginning of my laboratory rotation, we identified the multifunctional enzyme Transglutaminase 2 (TGM2) in a quantitative proteome screen to be upregulated in a highly aggressive and stem cell-like CRC cell subpopulation. TGM2 has been implicated in the development and progression of different types of human cancers. TGM2 acts as a transglutaminase for peptide crosslinking and as a GTPase. However, the functional role of TGM2 in CRC remained highly controversial and poorly understood. Therefore, we started to investigate the cellular and molecular mechanism of TGM2 in CRC development and progression, and evaluated TGM2 as potential drug target for future treatments.

To validate our initial findings in primary material of CRC patients, a strategy was developed to purify human epithelial tumor cells and matched normal epithelium from CRC patients undergoing resection of their primary tumor. Indeed, we could detect an increased TGM2 protein expression and transamidase activity in tumor tissue in comparison to matched normal mucosa cells.

The application of gene engineering technologies including shRNAs and CRISP/Cas9 to mediate a knockout of TGM2 expression in CRC cell lines resulted in an almost complete inhibition of CRC cell expansion as well as in a decreased ability to form tumorspheres in vitro. Furthermore, tumor initiation and growth were largely inhibited in xenotransplantations in vivo. We then assessed the cellular fate decisions that were affected by the inhibition of TGM2 in CRC, applying various single cell technologies. Single cell tracking via time-lapse microscopy and flow cytometry revealed that TGM2 ablation leads to a rapid induction of Caspase-3-dependent apoptosis in CRC cells. Despite these encouraging results on the function of TGM2 as an important survival factor in CRC, it remained elusive which enzymatic activity of TGM2 is pivotal for CRC progression. Performing functional rescue experiments with TGM2 isoform and enzymatic mutant variants revealed that the transamidation activity is critical for the pro-survival function of TGM2. In search of the underlying molecular mechanism of the pro-survival function of TGM2, RNA-sequencing of TGM2-knockdown CRC cell lines strongly hinted for alterations in p53 signaling. Various sophisticated technologies including super-resolution and time-lapse microscopy, proximity ligation assays and protein pull-down demonstrated that TGM2 directly binds to the central tumor suppressor p53, leading to its inactivation and therefore to the escape of CRC cells from apoptosis induction (Fig. 1). Therefore, upregulation of TGM2 activity in CRC cells strongly and directly inhibits p53 function, one of the hallmarks of the oncogenic cascade in CRC. These results suggest that TGM2 upregulation is an alternative way to suppress p53 activity in CRC, independent of the mutational status of p53.

To sum up, our article demonstrates that TGM2 is an essential survival factor in CRC and thus represents a promising target to improve CRC therapy. The inactivation of p53 by TGM2 binding indicates a general anti-apoptotic function which may be relevant in cancers beyond CRC. Currently, we are testing the efficacy of TGM2 inhibitors in preclinical models, and the applicability of TGM2 activity as biomarker in cancer. Overall, we are hopeful that this work will help to expand the treatment options available to patients with advanced colorectal cancer in the future.

Personally, it is a great privilege to work as a Clinician Scientist and thus to be able to consider cancer from both sides, from the bench and the bed. The work in the laboratory with a growing team has always been inspiring and will hopefully enable the improvement of therapy in the future. 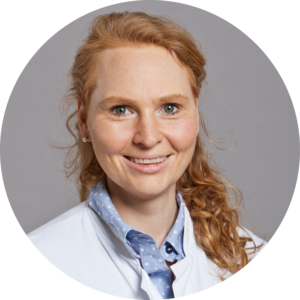