Anti-GD2 immunotherapy in the clinic

Neuroblastoma, a malignancy arising from primitive neural crest cells of the developing autonomic nervous system, is the most common extracranial solid tumor of childhood and accounts for approximately 10% of pediatric cancer deaths. Nearly all neuroblastoma patients are under the age of 5, and approximately 50% of patients with high-risk disease will relapse. The adoption of intensified, multimodal therapy has resulted in improvements in survival for children diagnosed with high-risk neuroblastoma. In particular, the utilization of the anti-GD2 antibody dinutuximab in upfront treatment protocols has reduced relapse rates, resulting in significantly improved overall survival. Dinutuximab was approved in 2015 by the FDA and is the first immunotherapy approved for pediatric cancers. Despite the success of anti-GD2 therapy, many patients still relapse and mechanisms of resistance to anti-GD2 are poorly understood.

GD2 is a disialoganglioside that is synthesized from ceramide via a complex pathway  involving the  activity of sialyltransferases and glycosyltransferases (Figure 1). GD2 integrates into the outer leaflet of the cell membrane and has been proposed to play roles in suppressing the immune system, as well as in metastatic progression. Despite being expressed on almost all neuroblastoma tumors to some degree, the mechanisms governing GD2 regulation and anti-GD2 response are not well understood. Our studies sought to better understand these pathways and identifying pharmacologic tools to augment them.

In vitro models of neuroblastomas have been shown to exist in at least two known epigenetic states. These (nor)adrenergic and mesenchymal epigenetic states resemble developmental programs activated during neural crest development. For example, progenitor cells of the autonomic nervous system commit to adrenergic or mesenchymal tissues depending on the expression of key transcription factors such as PHOX2B or PRRX1, respectively. Neuroblastoma tumors can co-opt the mesenchymal lineage to resist cytotoxic chemotherapies, targeted drugs such as ALK inhibitors, and differentiating agents such as retinoic acid.

One of the most striking observations between GD2-low and GD2-high cells was the low expression of ST8SIA1 (GD3 synthase) in GD2-low cells as opposed to B4GALNT1 (GD2 synthase) (Figure 2A-B). Many studies have used B4GALNT1 expression has a surrogate of GD2 density, but our studies show that ST8SIA1 expression correlates more strongly with GD2 density. We observed downregulation of ST8SIA1 in all GD2-low models, including parental cell lines, isogenic cell lines sorted into GD2-low and GD2-high populations, and in adrenergic cells lines converted into a mesenchymal lineage. Ectopic expression of ST8SIA1/GD3 synthase, but not B4GALNT1/GD2 synthase, substantially increased surface GD2 expression and restored response to anti-GD2 therapy.

We observed that the ST8SIA1 promoter was strongly associated with increased H3K27me3 in GD2-low cell lines. H3K27me3 is catalyzed by EZH2, a core subunit of the polycomb repressive complex 2.  EZH2 inhibition promoted widespread loss of H3K27me3, induced a reprogramming of cell state into an adrenergic-like expression profile, increased GD2 expression, and the response to an anti-GD2 antibody (Figure 3A-B).

We propose that transition from an adrenergic state to a mesenchymal state decreases GD2 expression through downregulation of ST8SIA1, rendering cells non-responsive to anti-GD2 immunotherapy. Treatment with an EZH2 inhibitor induces an adrenergic-like state through transcriptional, epigenetic, and chromatin remodeling, thereby re-expressing ST8SIA1, increasing GD2 expression, and restoring sensitivity to anti-GD2 antibody.

Where do we go from here?

There are a few outstanding questions from our studies. 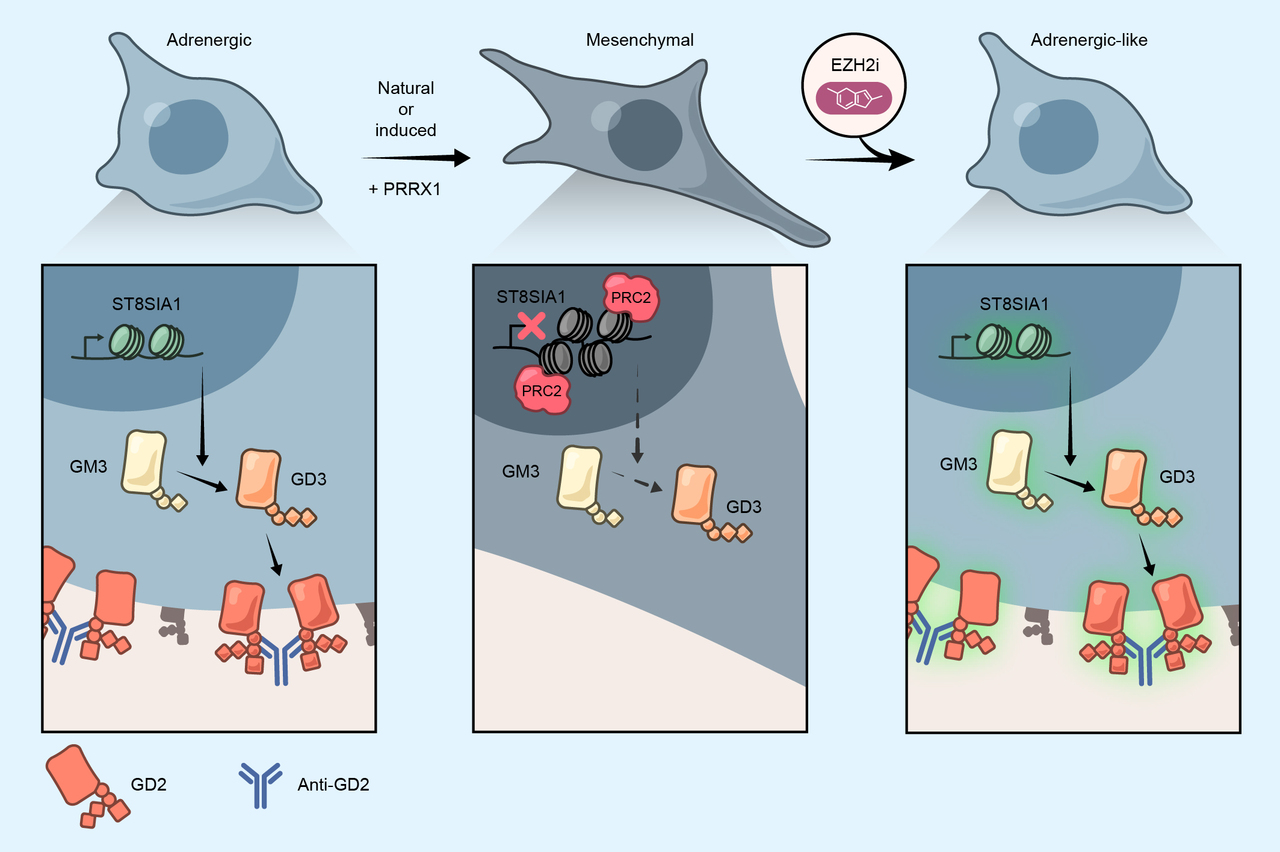 We show that GD2 expression is regulated by lineage plasticity in neuroblastoma and identify ST8SIA1 downregulation as a key bottleneck to GD2 synthesis. EZH2 inhibition in mesenchymal NB cells induces an adrenergic-like state, elevates ST8SIA1 expression, and synergizes with anti-GD2 therapies.