Cancer progression is the result of evolving crosstalk between different cell types within the tumor microenvironment (TME)[1]. Fibroblasts are a key cellular component of human tissues and tumors, and can be further divided into two types based on their response to their microenvironment: resting and activated fibroblasts. The activation of stromal fibroblasts into cancer-associated fibroblasts (CAFs) has been suggested to promote primary tumor growth and progression[2, 3]; however, the mechanisms underlying the crosstalk between tumors and fibroblasts that drive stromal heterogeneity remain unknown. Therefore, in this study we investigated the mechanisms that underpin the differential activation of CAFs during cervical carcinogenesis and determined the relevance of these observations to cervical cancer (CC).

Wnt proteins are key regulators that impacts diverse cellular processes, including cell proliferation, survival, and cell fate specification[4]. Hence, we set out to determine if Wnt proteins are involved in the generation of tumor-promoting CAFs. We found that high Wnt2B levels were positively correlated with the number of CAFs in CC.

Exosomes with different contents are released into the extracellular environment by multiple cell types. Cancer-secreted exosomes mediate intercellular communication between tumor cells and TME by transporting signaling molecules as cargo[5]. It has recently been suggested that a subset of extracellular Wnt proteins could be transported via exosomes. In our study, Wnt2B was characteristically enriched in CC-secreted exosomes and transferred into fibroblasts, confirming that Wnt proteins are packaged into exosomes for functional release. Moreover, we detected the expression of CAF markers (α-SMA and FAP) in NFs treated with exosomes secreted by CC cells containing Wnt2B, assessed their activation state using wound healing, Transwell, and CCK8 assays. All these experimental results revealed that exosomal Wnt2B is a novel and highly potent regulator secreted by CC cells that could drive the conversion of NFs into CAFs.

Furthermore, we focused on possible mechanisms of fibroblasts activation. According to recent literature, it has reported that activating the Wnt/β-catenin pathway in fibroblasts been implicated in the drive and maintenance of its phenotypic switch[6]. Our study has revealed that CC-secreted exosomal Wnt2B promotes nonP-β-catenin accumulation and translocation in the fibroblasts nuclear, which represent the activation of Wnt signaling. To sum up, Wnt2B was characteristically enriched in CC-secreted exosomes and transferred into fibroblasts to promote fibroblast activation via Wnt/β-catenin signaling. In addition, inhibiting exosomal release or the Wnt/β-catenin signaling pathway diminished activation induced by exosomal Wnt2B, while circulating exosomal Wnt2B promoted CAF conversion in vitro and its expression was significantly higher in CC patients.

Taken together, our findings indicate that CC cell-derived Wnt2B can induce the activation of fibroblasts into CAFs, mainly via exosome-dependent secretion, thus providing directions for the development of diagnostic and therapeutic targets for CC progression. 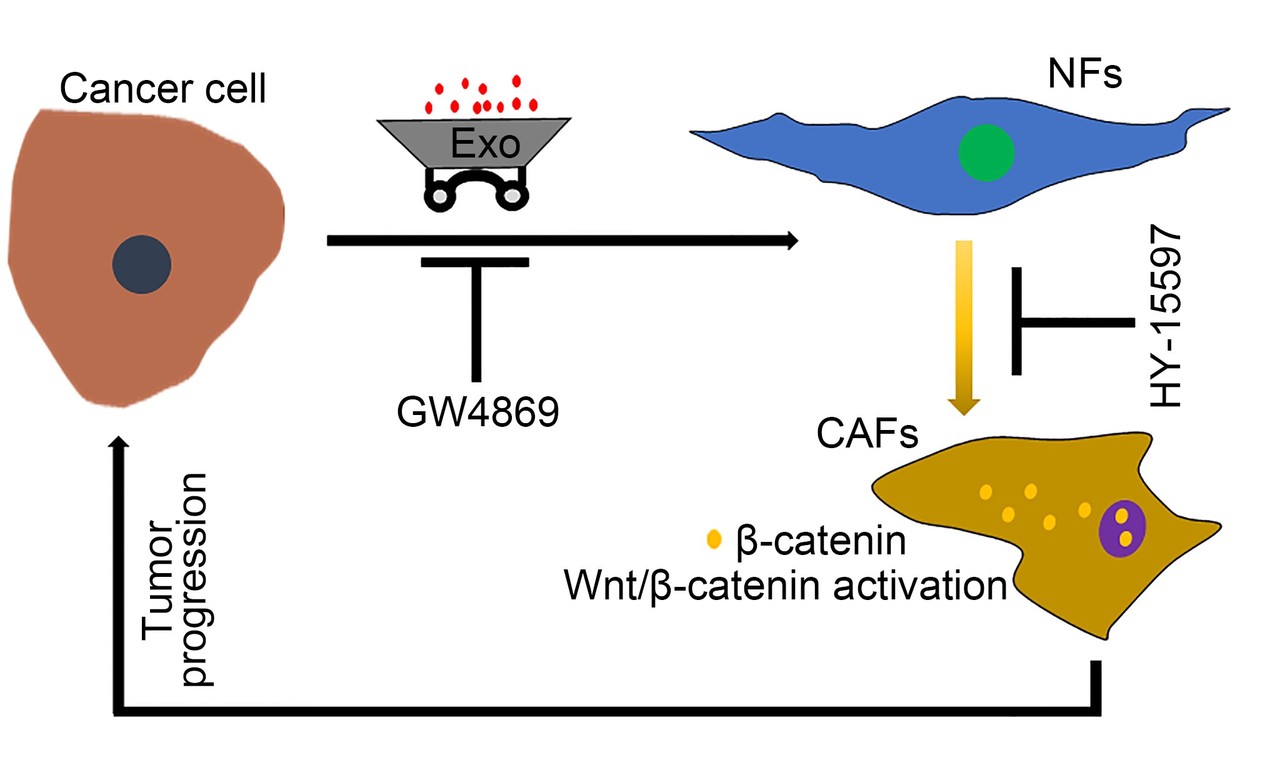 Cervical cancer cell-derived Wnt2B can induce the activation of fibroblasts into CAFs, mainly via exosome-dependent secretion, thus providing directions for the development of diagnostic and therapeutic targets for cervical cancer progression.