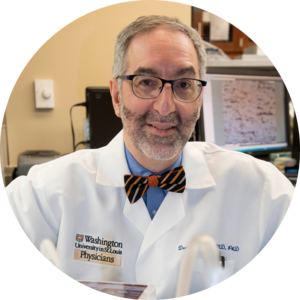 David H. Gutmann received his undergraduate, graduate (PhD) and medical (MD) degrees from the University of Michigan, where he trained in immunogenetics in the laboratory of Dr. John Niederhuber. During his residency in Neurology at the University of Pennsylvania, he worked with Dr. Kenneth Fischbeck who sparked his interest in neurogenetics. He then returned to the University of Michigan for research fellowship training in Human Genetics with Dr. Francis Collins. During that time, he identified the neurofibromatosis type 1 (NF1) protein and began to elucidate its function as a RAS regulator. In late 1993, Dr. Gutmann was recruited to Washington University, becoming a full professor in 2001 and the Donald O. Schnuck Family Professor in 2002. He established the St. Louis Children’s Hospital Neurofibromatosis Clinical Program in 1994 and the Washington University Neurofibromatosis Center in 2004. His laboratory is currently focused on understanding the genomic, molecular and cellular basis for nervous system problems affecting children and adults with NF1 using both human induced pluripotent stem cells and novel genetically engineered mouse strains. They have used these preclinical models to define the cellular origins of tumors, the contribution of the tumor microenvironment, and the major growth control pathways that dictate brain development in NF. Moreover, the use of NF1 as an experimental model system has revealed numerous insights into the basic neurobiology of human disease, including tumor-stroma dependencies in the cancer ecosystem, the impact of the germline mutation on phenotypic expression, the role of sexual dimorphism in clinical outcome, and the mechanisms underlying cell type-specific, brain region-distinct, and signaling pathway diversity. Dr. Gutmann has published over 450 peer-reviewed manuscripts, and has been recognized for his achievements with numerous awards, including the 2012 Children’s Tumor Foundation Frederich von Recklinghausen Lifetime Achievement Award, the 2013 Washington University Distinguished Faculty Research Award, the 2014 Riley Church Lectureship, the 2017 Alexander von Humboldt Award, the 2019 Society for Neuro-Oncology Abhijit Guha Award, the 2020 National Neurofibromatosis Network Advocate of Hope Award, and the 2020 American Academy of Neurology Neuro-Oncology Investigator Award. He is a Fellow of the American Academy of Neurology, and recently completed his tenure as a member of the National Institute of Neurological Disorders and Stroke Advisory Council.

Nature Portfolio Cancer Community
We use cookies to help improve your experience. By continuing to browse our website you are consenting to our use of cookies.
Learn more